The Woodland Gang Save Their River 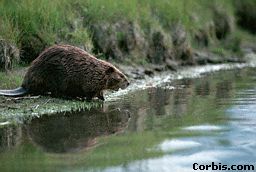 Somewhere in Southern Ontario, there is a forest called Woodland Forest. A group of animals live there called the Woodland Gang.

One day, Toby Trout called everyone together for a meeting. He said it was very important.

"What did you call a meeting for?" asked Rachel Rabbit. She was very curious.

"This is important, Carol," said Chris Carp. "Our river is getting polluted. We have to do something about it."

"I think my food might be dying off," Toby Trout added.

"My home is getting dirty," Carol Crayfish stated.

"I have not been feeling well lately," said Trixie Turtle.

"What will we do?" asked Reggie Raccoon. "It just gets worse every day. Soon the whole river will be full of garbage."

All of the animals thought for a minute.

"I say," began Oscar Owl, "why don't we see what is causing the problem? Then we can think of a suitable solution."

As the animals went upstream, they noticed that there was less garbage the farther they went. There was still the odd pop can, plastic cup, or old tire, though.

"Just look at this mess," said Sally Squirrel. "Who could do this to our river?"

"It must be those humans again," Billy Beaver commented. "I wish they were all nice like Ranger Rupert and his helpers." Everyone nodded their heads in agreement.

Finally, the animals came to a spot that looked like the source of the garbage. A few pieces of garbage lay at the side of the river, and beyond that was a trail leading up to a campsite.

Everyone agreed but Dave Deer. "Maybe we should talk to them first and hear their side of the story."

"I agree with you," said Floyd Frog.

All the animals, except Chris Carp and Toby Trout, went up the trail. When they came to the campsite, they stopped.

"Is anyone here?" called Rachel Rabbit.

A little boy and little girl came over to the animals. "Cool! Talking animals!" said the boy. Both children looked at the animals curiously.

"We came to see why our river is full of garbage," said Floyd Frog.

"What does that have to do with us?" asked the girl.

"We think maybe you have been throwing garbage in our river," stated Reggie Raccoon.

The children looked down at the ground.

"We throw garbage in the river, but it just goes away and disappears," said the boy.

"Disappears!?!" exclaimed Carol Crayfish. "It ends up in my home!"

Oscar Owl spoke up. "The garbage you throw in the river floats down to our part of the river. It does not just go away."

"Why don't you two come and see what the garbage does to our homes?" suggested Billy Beaver.

The children went to ask their parents. The parents decided to go along.

Everyone then walked, swam, or flew back to where the animals lived.

"What a mess!" said the mother.

"Why," said the father, "it looks like the garbage we threw in the river. I thought it would all go out to the bay and be gone forever, not collect here!"

The girl turned to face the animals. "I'm sorry. I didn't mean to make your homes dirty."

"Just promise not to throw garbage in the river again. It belongs in the dump."

"We promise!" said the family together.

"Why don't we help to clean this mess up?" suggested the mother.

All the animals and people started working. Within an hour, the river was clean again.

"Don't forget to put your garbage where it belongs - in the dump!" said Billy Beaver.

"Bye!" they all said. "Come back and visit sometime!"

Everyone waved as the family turned and left . . .

And that is the story of how the Woodland Gang saved their river.