On the State of the Washrooms 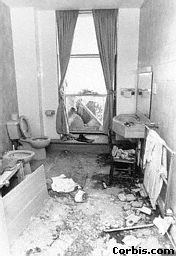 I thought it could not get worse than residence washrooms. I lived in residence for four years and experienced floors flooded from the showers or broken toilets; I saw that my roommates could miss the toilet in an all-female suite; I experienced running out of toilet paper, paper towel or soap for days; I saw roommates exit the bathroom without washing their hands; and I saw that Housing's idea of cleaning was a quick wipe with a mop once a week.

I was wrong. It does get worse.

The washrooms in York Lanes always have toilet paper scattered over a dirty floor, and the lock on one stall has been broken for as long as I can remember. Ironically, the nicest washroom on campus, besides my apartment washroom, is upstairs in York Lanes. Of course only employees in the building tend to use it.

The award for the worst washroom on campus, though, goes to the Student Centre. I had not been in that washroom for four years, but used it during York Fest. As I looked for an unoccupied stall, I discovered that two of the stalls did not have doors. Another had a door, but it was resting sideways across the doorway, unattached. I waited to use one of the three stalls that actually had doors. Afterwards, when attempting to wash my hands, I discovered that there was no soap in any of the dispensers, and no paper towels. Not being able to dry my hands is no big deal, but not being able to wash my hands properly makes me picture the germs crawling on my hands. It also makes me picture the germs on other people's hands, people who touch the door handle on their way out, then eat their food, then go to lecture where they touch the chairs and tables . . .

Since the washrooms are in the Student Centre, many of York's new students would have used them. I can imagine what their first impressions of York were after seeing the state of the washrooms . . . their second impressions, of course, would have involved our famous lineups.

I think back to the improvements they made to the Student Centre a couple of years ago. I may be wrong, but I think we each had to contribute $20 of our tuition money. Too bad washroom improvements had less priority than new tables. Although the washroom now has new stall walls and doors, it is still not clean. Even in these times of tuition cuts, decent washrooms should be a priority across campus. All we ask for is a clean place to pee.