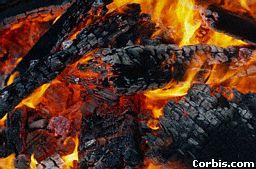 The boy wiped the sweat from his brow as the flames licked out at him from the forge. This was his life. It was all he had ever known. From an early age, he had watched, fascinated, as his father worked his craft: his father, the swordsmith.

Eventually, the boy had been allowed to help: carrying supplies, stoking the fire. He had never been allowed to make a sword of his own. "You are not ready yet," his father would say over and over, but the boy knew he was ready. He had watched his father enough that he knew all there was to know about swordsmithing: he lacked only the practical experience.

Now was his chance. His father was to be gone for a month, delivering his wares to some far-off place. Unlike others his age, the boy had no desire to go off and see the world. All he desired was in the smithy next to their house. The boy was determined to prove himself to his father once and for all. He would not make a simple sword like his father made: he would make the grandest sword his father had ever seen. He would make a sword fit for a king.

He sat polishing the sword, again, so that he could see his reflection in the blade. He heard the horse and cart stop before the smithy door. As his father came in, the boy held the sword out. The father took it without much surprise.

The hilt was shaped to the boy's hand, each groove on the handle spaced precisely for his fingers. The guard was a lacework pattern of a knight battling a dragon. A chain of delicate links ran from one end of the hilt to the other.

"It is beautiful," the father said, "but useless. Once your hands grow or become more callused from your work, you will not be able to grip the handle properly. An enemy's sword could run right through the dragon's body on the guard and into your hand. This chain will only get in the way, and your enemy would have killed you before you got it off your belt."

Before the boy could react, the father had hit the sword against the grindstone that sat by the door. The blade shattered and the fragments fell to the floor.

The father turned and left the smithy. The boy stood and stared at the fragments of his sword.

All he had ever wanted to be was a simple swordsmith like his father, his father's father, and his father before him. Yet, destiny held other plans for the man. The swords he created were not simple swords: they were plain in styling, but had a magical quality he was unaware of. When he made a sword for a rogue who was passing through, little did he know what he was getting himself into. He soon found himself traveling far from home, to the silver mines of the North. Battling strange monsters and pursued by an evil mage, he wondered if he could ever return to the simple life he had once known.