A Skeptic In King Arthur's Court 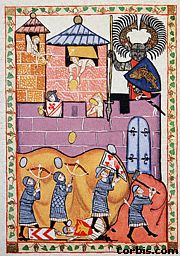 It was hard to pull the sled that way. It was heavy, and kept getting snagged on tree branches and stumps. The way to the smoke had been a smooth trail. After zzz had gone about half a mile, he came across a large fallen tree. It blocked the way ahead of him, and the trees were thick to either side. It would be difficult to get the sled over the tree - he would have to unload everything, including zzz, and carry it all over the tree stump one item at a time. xxx slumped down against the fallen tree, exhausted and frustrated.

"I said, 'What the 'ell are you doin' way out 'ere in the middle o' nowhere, sleeping?' Are you tryin' to get yerself and yer friend killed or something? Couldn't you see the smoke from my cottage?"

"I followed yer trail past my clear trail and off into the forest. What made you do that, when the smoke from my cottage was as clear as day?"

The man laughed. "A sparrow? Now that's a new one. Followed a sparrow!"