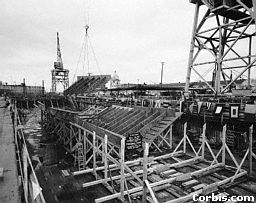 The discovery was made a few days before Christmas, by a university student who had just returned to Collingwood for the holidays. She was shocked when she went downtown to do some Christmas shopping and found that the Collingwood Shipyard Buildings were missing. Since she had seen them in the summer, she assumed that the buildings had to have been stolen sometime between September 1 and December 20.

The dismayed student went to report the theft to Collingwood's OPP, and was promptly escorted from the building. Even the local newspaper, the USS-Enterprise-Bulletin, refused to send a reporter to investigate.

"I was shocked," the student said in an interview with the Collingwood Insider, "that they did not even care about the theft of part of Collingwood's history. I know there have been problems with vandalism, but this goes way beyond that - this is theft, theft of whole buildings. The OPP has to get on the case right away, so we can get the Shipyard buildings back to where they belong."

It is still unclear who stole the Shipyard buildings and why. It may have been vacationing Toronto skiers or local youth, just stealing for the fun of it. Some even believe that the buildings were removed by supernatural forces, and now reside somewhere with Elvis.

While most Collingwood residents seem unconcerned with the theft of their historical landmarks, a certain student continues to fight for recognition of this problem. "I will not rest," she said, "until the thieves are caught and the Shipyard buildings are returned to their proper location."