Lady Macbeth: The Real Power Behind The Throne 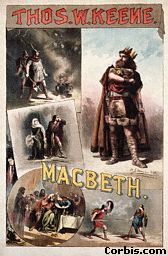 Power is a theme used by Shakespeare throughout the play Macbeth. The plot involves Macbeth trying to gain more power. He considers killing Duncan so that he will become king in his place. Lady Macbeth then convinces him that he should carry through with his plan. Macbeth also wants to kill anyone that threatens his chances of being king, including Banquo. Power is used by certain characters in the play to influence others. One such character is Lady Macbeth. In the beginning of the play, she is a strong-willed character. She takes on the role of a dominant male. She has great influence over her husband, who is weaker than she is. It is her influence that convinces Macbeth to murder Duncan. Lady Macbeth is the real power behind the throne because she is the dominant partner at the beginning of the play, she persuades Macbeth to achieve his goal of being king, and she plans and organizes the murder of Duncan.

Firstly, Lady Macbeth is the dominant partner at the beginning of the play Macbeth, thus she is the real power behind the throne. Macbeth and Lady Macbeth are opposites in many ways. He is weak, indecisive, and takes on the traditional female role in a marriage; she is strong, decisive, and takes on the traditional male role. One place in the play where Macbeth's character is shown is Act I, Scene 5, Lines 15-17. This is just after Lady Macbeth receives the letter from Macbeth. She says of Macbeth:

Glamis thou art, and Cawdor, and shalt be / What thou art promis'd: yet do I fear thy nature / Is too full o' the milk of human kindness.[F1]

Lady Macbeth thinks that being gentle is a weakness. When she says Macbeth is "too full o' the milk of human kindness," she means that he is too gentle and weak to murder Duncan. Another part of the story that shows Macbeth's character is Act II, Scene 2, Lines 57-74. Macbeth has just murdered Duncan, and he is feeling guilty about doing it. He wishes Duncan were alive again. He is also paranoid that someone will discover he has murdered Duncan. He is afraid that his guilt will be a stain on him, like the blood. Although the blood may be washed away, his sins will not. Macbeth is becoming irrational in this scene. He is busy worrying about his guilty conscience when there are things to be done. Lady Macbeth, on the other hand, is calm and rational. She tells Macbeth to wash his hands and change his clothes so people will not discover his crime. Lady Macbeth's character is shown in Act I, Scene 5, Lines 38-54. This is just after Lady Macbeth gets Macbeth's letter, and just before Duncan arrives at the castle. When she says, "unsex me here,"[F2] Lady Macbeth is asking to be more masculine. "...take my milk for gall"[F3] means that she wants her feminine weakness to be taken away. Lady Macbeth is asking to be stronger and crueler so that she can murder Duncan herself. She is strong-willed because it takes courage to think of killing someone. In Act I, Scene 5, Lines 60-73, Lady Macbeth's characteristics are revealed again. This is when Macbeth arrives home from battle. Duncan has not arrived yet. Lady Macbeth is instructing Macbeth on how to act. She knows he is not a good actor, and because of this someone might get suspicious of their plans. She says, "put this night's great business into my dispatch"[F4] and "leave all the rest to me,"[F5] indicating that she is taking control. Lady Macbeth is also confident. She knows they will succeed in murdering Duncan. Because Lady Macbeth controls Macbeth, she is the dominant partner at the beginning of the play, thus she is the real power behind the throne.

In addition, Lady Macbeth is the real power behind the throne because she persuades Macbeth to achieve his goal of being king. After talking with the witches, Macbeth thinks about killing Duncan. He wants to be king, but is unsure whether he can go through with the murder. Macbeth changes his mind six times, until Lady Macbeth finally convinces him to do it. In Act I, Scene 7 of the play, Duncan is in Macbeth's castle. Macbeth is trying to make his decision. In Lines 13-20, Macbeth decides against the murder:

First, as I am his kinsman, and his subject, / Strong both against the deed; then, as his host, / Who should against his murderer shut the door, / Not bear the knife myself. Besides, this Duncan / Hath borne his faculties so meek, hath been / So clear in his great office, that his virtues / Will plead like angels, trumpet-tongu'd against / The deep damnation of his taking-off.[F6]

Macbeth does not think he should kill Duncan because he is Duncan's cousin, subject, and host. Also, Duncan is a good king who does not deserve to be murdered. Just when Macbeth decides not to go through with the murder, Lady Macbeth enters the room. She uses taunts to convince Macbeth to murder Duncan:

Wouldst thou have that / Which thou esteem'st the ornament of life / And live a coward in thine own esteem? . . . When you durst do it, then you were a man; / And, to be more than what you were, you would / Be so much more the man.[F7]

Lady Macbeth calls Macbeth a coward and says he is not a man. She hopes that by insulting Macbeth she can make him kill Duncan. Another method Lady Macbeth uses is convincing Macbeth that they will not fail:

We fail? / But screw your courage to the sticking-place, / And we'll not fail . . . What cannot you and I perform upon the unguarded Duncan? What not put upon / His spongy officers who shall bear the guilt / Of our great quell?[F8]

By the end of the scene, Macbeth is finally convinced that he should murder Duncan. Lady Macbeth persuades Macbeth to achieve his goal of becoming king by taunting him and telling him that they cannot fail. Because she is able to do this, she is the real power behind the throne.

Furthermore, Lady Macbeth plans and organizes the murder of Duncan. Consequently, she is the real power behind the throne. All that Macbeth knows is that he is going to kill Duncan. He does not know exactly how to go about it. Lady Macbeth is the one who plans everything and leads Macbeth step-by-step through the murder. In Act II, Scene 2, Lines 1-13, it is shown what Lady Macbeth has done to prepare for the murder:

That which hath made them drunk hath made me bold . . . The doors are open: and the surfeited grooms / Do mock their charge with snores: I have drugg'd their possets . . . I laid their daggers ready, he could not miss 'em.[F9]

Lady Macbeth gets the guards drunk and sets their daggers out where Macbeth can find them. All Macbeth has to do is take the dagger and stab Duncan. Lady Macbeth does most of the planning and preparing. In Act II, Scene 2, Lines 44-57, Lady Macbeth is again telling Macbeth what to do:

Go get some water, / And wash this filthy witness from your hand. / Why did you bring these daggers from the place? / They must lie there: go carry them, and smear / The sleepy grooms with blood . . . Give me the daggers . . . I'll gild the faces of the grooms withal.[F10]

Lady Macbeth is ordering and scolding Macbeth like a child. He does not think to wash his hands or leave the daggers in the room. Lady Macbeth, who is calm and practical, must remind him to do these things. Another place where Lady Macbeth "takes care of business" is Act III, Scene 4, Lines 93-120. This is at the banquet, just after Macbeth sees the ghost of Banquo. Macbeth is about to reveal the fact that he murdered Banquo, but Lady Macbeth tries to save the day:

Macbeth is saying incriminating things about himself and Lady Macbeth is trying to stop him. First, she tries to make an excuse for Macbeth, saying he is sick. She then tries telling everyone to leave. Although she "makes a superhuman effort to prevent Macbeth from betraying himself,"[F12] it does not work. Lady Macbeth leads Macbeth along, planning everything and telling him what to do. Because she plans and organizes the murder of Duncan, Lady Macbeth is the real power behind the throne.

Lady Macbeth is the real power behind the throne because she is the dominant partner at the beginning of the play, she persuades Macbeth to achieve his goal of being king, and she plans and organizes the murder of Duncan. Lady Macbeth is strong-willed and takes on the traditional male role in a marriage. Macbeth, on the other hand, is weaker than she is, and takes on the traditional female role in a marriage. For these reasons, Lady Macbeth is the dominant partner. Also, Macbeth is undecided on whether to murder Duncan or not, until Lady Macbeth taunts him and then assures him. It is she who persuades him to murder Duncan. Finally, Lady Macbeth plans and organizes the murder, so that all Macbeth has to do is the actual killing. It is power that Lady Macbeth uses to get her way in the world. She uses her power over Macbeth to convince him to murder Duncan. By murdering Duncan, Macbeth gains power for himself and Lady Macbeth - the power of a queen and her king.