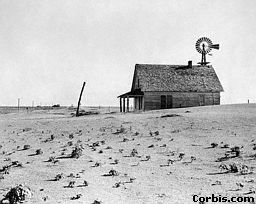 The man looked out over the horizon. All he could see was dust - dull brown dust swirling over the landscape, obscuring the view of objects more than a few yards away. The dust painted everything a monotonous brown - the fields were brown, the fence was brown, the house was brown, and even his own clothing and skin were caked with the all too familiar dirt. Had there been any crops growing, they would be brown too. However, there were no plants to bee seen. When the rain had ceased to fall that spring, the plants all withered and died. The man felt like he was going to wither and die too.

"Daddy!" the dirt-covered child cried, running towards him. The man picked the child up. "Why are you cryin'?" the child asked innocently.

"I ain't cryin', I just got dust in my eye, that's all." The man could not bear to tell the child the truth: without the rain falling, the crops would not grow. Without the crops growing, they would soon run out of food and money. So far, they had been eating last winter's stores, but they would not last long. Then, they would slowly starve, unless the rain started again soon.

The man turned his back on the clouds of dust and carried the child inside.

The man woke up suddenly. He had been dreaming of the good times, when the land was green and crops grew plentifully. He had never worried then about how to put food on the table - the land provided them with all they needed. Now the reality hit him as it did each morning: they were experiencing a drought, which had no signs of ending soon. He almost began to cry, but controlled himself, and walked into the main room of the house to start a fire.

His wife soon came into the room, and looked at the shelves. They were almost bare. She took some items off of the shelves and began to make watered-down porridge. Soon, they began to wonder where the child was - usually, he was the first one downstairs in the morning, the only one eager to start another day. The man climbed the ladder to the loft, only to find that the child was missing.

He almost panicked. He searched around the house, then went outside. The dust still filled the air, only this day it was worse. He coughed, then covered his mouth with his hand. He had to go out and find the child.

He could only see a couple of feet in front of him. He walked back towards the outhouse, thinking that was the most likely place for the child to have gone. He called the child's name, but choked as he inhaled more of the unending dust. Finally, a shape appeared before him.

"It's goin' to be fine." He meant it, too. He had come to realize that just when everything seemed desperate, things would turn out fine. They would find a way to make it through the drought. With hard work and God's help, the family would survive.