A Ride Through the Countryside 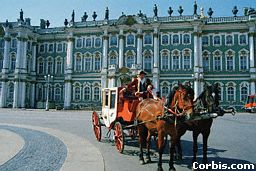 He was a middle-aged man, with a greying beard, and a plump build. His purple, velvet robes draped across the intricately-carved wooden throne, and a golden crown set with sparkling sapphires sat atop his head. He drummed the fingers of his left hand on the arm of the throne, while the right hand cupped his chin. He yawned, then snapped his fingers sharply. Immediately, servants came forward, one with steaming meats on a silver platter, one with blood-red wine in a golden goblet, another with fingers poised to play a lute, and the last with pen and parchment in hand.

"I find myself growing weary of this dull day," the King said to the parchment-holding servant. "I wish to ride through the countryside."

Immediately, the servant called out orders to the others. The King was lifted on his throne by servants who had been waiting nearby. He was carried from the palace to where an ornate, gold- trimmed carriage and a team of pure white horses waited. Two servants helped the King to climb into the carriage, and seated him on plump, red velvet cushions within. The carriage set off down the cobblestone roadway.

The carriage travelled through the countryside as the King gazed from his window at the scenery. They passed fields of wheat, with peasants toiling beneath the afternoon sun; ornate homes of noblemen, surrounded by high iron fences; and, occasionally another traveller on foot, on horseback, or riding in a carriage or cart. Eventually, the roadway, now dirt instead of cobblestone, entered a dense, vibrantly green forest. They had been travelling through the forest for some time when suddenly the carriage tilted, and the King tumbled from his seat, landing against the wall with his feet in the air. Servants immediately helped the King from his awkward position and out of the carriage. They, along with the King, surveyed the damage.

"Sire, it appears as though the front, left wheel of the carriage was broken when it hit a rut. The carriage cannot go farther, so I am afraid you must ride one of the horses, or wait until we ride back to town and bring another carriage."

The King thought for a minute. "I think I shall ride one of the horses back to the palace. It has been quite a while since I have done so, and it might be a pleasant change from my boredom."

So it happened that the King rode through the forest, aside three of his servants. A fog started to form, and they soon found themselves unable to see far in front of them. The King rode a while through this fog, then called out to his servants. There was no answer. He called again, louder, but still there was no answer. The King wrapped his thick, velvet cloak tighter around his shoulders as he realized he was lost, and alone, in the forest.

He did not know what to do. He tried calling his servants again, but in vain. He decided to continue riding in the same direction they had been heading in. He urged his horse forward. They had not gone far when the horse stumbled, unable to see a tree root in the thick fog, and the King was thrown to the ground. He cried out in pain as he landed with his left leg twisted beneath him. After a moment, when the pain had subsided somewhat, he grasped a nearby tree and attempted to stand. Pain shot through his leg again, and he sat back down on the moist, leaf- covered ground.

The King lay there for an hour before he fell asleep, lacking anything better to do. He was shaken awake two hours later by a rough-looking man, also middle-aged with greying whiskers, but with coarse hands and grey, well-worn clothes.

The King was terrified: this man looked the sort of ruffian who would rob him or hold him for ransom . . . or murder him. However, unable to run away, the King could only look at the man.

"Thought you was dead for a minute," the man said. "Those are pretty fancy clothes - must be a nobleman, eh? What are ya doing out here in the woods?"

"I . . . I had been riding and I lost my way," the King answered, relieved that the man did not recognize him as the King: that might reduce the chance of being held for ransom.

"Hmm . . ." the man said, examining the King's left leg. "Looks like it's broke." He looked around, and finally grabbed a short, sturdy twig. He removed his shirt and ripped it into strips. "Same thing happened to my boy once, had to fix it myself, them physicians cost too much." He yanked on the King's leg, receiving a yelp of pain in response. He then set the stick against the leg, and bound it there with strips of cloth. He searched through his satchel and pulled out a vial of ointment. He applied some of the strong-smelling mixture to various cuts and scrapes on the King's face, arms, and legs. He then produced a piece of bread from his satchel, offering it to the King.

As the King sat eating the plain bread, for lack of anything else, the peasant walked away. He soon returned leading the white horse, who was looking nervous but unharmed.

"I can walk with ya and help ya find yer way, if ya feel up to it," the peasant offered.

The King nodded, thinking of his warm feather bed and blazing fireplace back at the castle. The peasant helped him mount his horse, carefully avoiding irritating the injured leg. The peasant then led the horse forward, soon finding his way back to the road. He led the horse until they reached the edge of the forest.

"I shall find my way from here," the King told the peasant.

"If yer sure," the peasant said, "I can walk with ya if ya need, but I'd like to get back to the family. They'll be wondering where I got to, and so will yours, I'd wager."

The King nodded. He urged his mount forward, then stopped and swung it around to face the peasant again. "Thank you," he said hesitantly, used to saying it only to gift-giving dignitaries, but for the first time in his life really meaning it.