Comparison of Sir Galahad to
the Boy from "Araby" 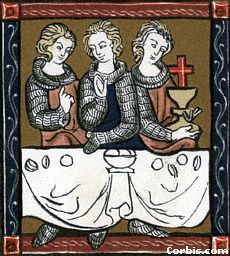 Sir Galahad is a knight of King Arthur's round table. He goes on a quest to find the Holy Grail and is successful. When he finds the Grail, he sees Christ. In the story "Araby", the boy goes on a quest to win the love of Mangan's sister. However, instead of achieving his original goal, he gains the knowledge that the girl is not worth his trouble. The boy from "Araby" is similar to Sir Galahad because of the presence of religion in his life, because of his purity in impure surroundings, and because of his quest.

First, in both "Araby" and Sir Galahad's story, religion is present, thus the two characters resemble each other. The early years of Sir Galahad's life are spent in a convent, where nuns raise him. Because of this, he grows up to be a religious man. He goes to church regularly, and he tries to stay pure and please God. Later in his life, Sir Galahad goes on a quest to find the Holy Grail, which is an object that is associated with God. When Galahad finds the Grail, he sees Christ, and is taken to Heaven. Sir Galahad has many religious experiences, and so does the boy from "Araby." The boy's house once belonged to a priest. In the back room, the boy found "a few paper-covered books, the pages of which were curled and damp: The Abbot by Walter Scott, The Devout Communicant and The Memoirs of Vidocq."[F1] The boy attends the Christian Brothers School, and Mangan's sister goes to a convent. Religion has such an influence on the boy's life that he says of Araby, "I recognized a silence like that which pervades a church after a service."[F2] Since Sir Galahad's story and "Araby" both contain elements of religion, the boy resembles Sir Galahad.

Secondly, Sir Galahad resembles the boy in "Araby" because they both remain pure in impure surroundings. Sir Galahad's mother tricks his father into sleeping with her, and then Galahad is born out of wedlock. He is abandoned by his father, who has more important things to do than look after his son. His mother then commits suicide. The place where Sir Galahad lives has many wars, and honor is given to the best fighters. To make up for his impure surroundings, Sir Galahad must stay pure. He is a virgin, and remains that way throughout his entire life. Even though he kills people, he will only do this if they are unbaptized. Like Sir Galahad, the boy from "Araby" has impure surroundings. The boy is an orphan who lives with his aunt and alcoholic uncle. He lives in an old, run-down house in a poor neighborhood. A description of the house says that "air, musty from having been long enclosed, hung in all the rooms, and the waste room behind the kitchen was littered with old useless papers."[F3] Also, "the wild garden behind the house contained a central apple-tree and a few straggling bushes."[F4] Despite his surroundings, the boy remains innocent and pure. He is young, so he falls blindly in love with Mangan's sister. He is too innocent to see that she is too old for him and that she may also be a flirt. Because the boy from "Araby" and Sir Galahad remain pure even when surrounded by impurity, they resemble each other.

Lastly, Sir Galahad and the boy from "Araby" go on quests that parallel each other. Sir Galahad's quest is to find the Holy Grail. Along the way, he is put through many tests and trials. He fights many battles to save innocent people and their property. He also tries to make peace between knights that fight each other for land. He has to remain pure and not kill people unnecessarily, or else he cannot find the Grail. Sir Galahad's quest ends when he finds the Grail, sees Christ, and is taken to Heaven. The boy's quest is to win the love of Mangan's sister. Many challenges face him, including the fact that he is younger than her, she barely notices he exists, and he has nobody to aid him in his quest. One test he goes through is trying to see Mangan's sister whenever he can. He says that one way he did this was:

Every morning I lay on the floor in the front parlour watching her door. The blind was pulled down to within an inch of the sash so that I could not be seen. When she came out on the doorstep my heart leaped. I ran to the hall, seized my books and followed her. I kept her brown figure always in my eye and, when we came near the point at which our ways diverged, I quickened my pace and passed her.[F5]

He goes through a lot of trouble just to see her. He has to time everything precisely to do this. Another test he goes through is surviving the "tedious intervening days"[F6] before going to Araby. It is quite a challenge for him to be patient. He has to also try and do his school work when "her image came between (him) and the page (he) strove to read."[F7] Another thing he had to do was wait for his drunken uncle to come home and give him money, and still get to Araby on time. A difficulty awaits him in Araby when he realizes he does not have very much money. Two pennies and a sixpence can not buy a very good present. At the end of his quest, the boy gains knowledge. He realizes that Mangan's sister may be just a flirt that does not deserve his affection. He also learns that the key to success is not to be vain. Because Sir Galahad and the boy both go through many tests on their quests, the quests parallel each other, and so Sir Galahad is similar to the boy from "Araby".

Araby and the Writings of James Joyce

Idylls of the King by Alfred Tennyson