The Coming of the Saviors

A teenage girl is sent to a cousin's house for a month. The cousin is a loner, an outcast, who is interested in U.F.O.'s. She believes that some day aliens will come to take her away to a better place. The night before the following scene, she is killed by a train. She stood on the tracks believing that the train's lights were lights from the U.F.O. that was coming for her. 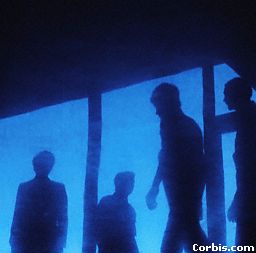 The next day at school, everywhere I went I heard the word whispered: "suicide." Grief councillors had been called in to the school, and they comforted all the crying students, girls that before had taunted her, and girls who had never even known her. I swear the school's guidance councillor wandered the halls looking more smug than usual. She reminded her coworkers at any chance she got that she had been right about the girl: she did not care about anything, and she was suicidal. A lost cause.

Her family put on a good show at the funeral. Even her stepfather dabbed at his eyes once with his handkerchief. Afterwards, they went back to watching tv.

Comforting words and gestures were offered to me, by those I knew vaguely and by total strangers. I shrugged them off. What did I need comforting for? What had I lost? A cousin I barely knew, who I had gotten stuck living with for the past month, who I had teased as a child and ignored more recently?

After a week, they had found somewhere to ship me off to, a second cousin who lived on the other side of the country somewhere. I packed as soon as I found out, as people shed tears over a girl nobody had cared about.

When I had my suitcases packed, I looked around her room. There was the giant poster of the white, big-eyed alien that had scared me that first night. There were her paintings, of the palm-treed promised land, of little green men in white robes, of shining spaceships in formation. One painting caught my eye, one hanging behind her door, one that I had not noticed before. It was a self-portrait: she was standing with her arms spread to the heavens, light from a silver spaceship washing over her. On her face was painted a look of pure ecstasy, eyes shining, mouth smiling as she stared at the spaceship. I untacked the paper from the wall and slipped it into my suitcase. Nobody would notice if it was gone.

It seems so long ago. The painting is framed now, hanging on my bedroom wall. I stare at it for hours sometimes, reliving that night. Who could have known that as she had painted that she painted her last moments of life? The spaceship had been a train, but it was the same anyway. Just before the train had hit her, I saw the same look of ecstasy on her face. It was the greatest moment of her life.